If a modeler adds in a boatload of details but nobody is able to see it, is it really there?

This theme is one that is near and dear to my heart.  While I delve deep into aircraft topics and occasionally dabble in armor, my focus and passion is clearly ship-building.  I think that ships, more than any other build category, lend themselves to hyper-detailing en masse.  Sure, you can go crazy on wheel wells or tank interiors, but to me nothing says “time and money-intensive work” more than a 1:700 battleship decked out with individual portholes, cable reels, and/or (heaven forbid!) wood planks.  The level of minutiae that can be crammed into a modern ship kit is exponentially higher than was possible one or two decades ago.  Me?  I love the stuff.  But is there a limit to what we can and should reasonably hope to attain?

This notion reminds me of an ongoing conversation which I have with someone at my work.  He’s a modeler too, but keeps his focus limited to large-scale model railroading  We constantly harangue each other about our modeling tastes: he with his (in my opinion) over-sized, under-detailed locomotives and rolling stock, me with my (in his opinion, probably) too-tiny, needlessly complicated carriers and battleships.  While our mutual ribbing is good-natured, he has a valid point that, at his age he wouldn’t be able to see, let along build a 1:700 vessel complete with hand-painted resin crew members.  And while our discussion is more or less isolated to examples along those lines, it does raise the point that detail shouldn’t be added if you (the modeler) are physically unable to see what’s being done.  That’s just an exercise in frustration waiting to happen.

But what about when the limitations are placed by the kit and not by your body?  That situation is one encountered far more often by those of us in the hobby.  You spend hours researching, say, the right interior burnished hue of a jet engine nozzle and work tirelessly to replicate it in miniature, only to discover when all is said and done that the darn thing is invisible in the finished kit.  Or, worse, you detail the actual inside of an aircraft fuselage even while knowing in advance that, when complete, the work will be completely sealed up, encased in permanent darkness.

Why do we do this?

Well, I’ll tackle the easy one first: adding details in what will be a completely enclosed space; you know, the “at least I’ll know it’s there!” approach.

Moving on, I do feel that its worth making concessions to detail in view of physical limitations.  If you can’t see it, what’s the point?  Why make yourself go crazy and even more blind from squinting into a wheel well that will be all but invisible in the end anyway?

Now, as a ship-builder, I find myself on that cusp all too frequently: of knowing that detail will be concealed to the point that its absence wouldn’t be noticeable, but its presence might make the difference between a good model and a great one.  A recent and quite relevant example of this came across my bench on a recently finished USS Hornet (CV-8) build. 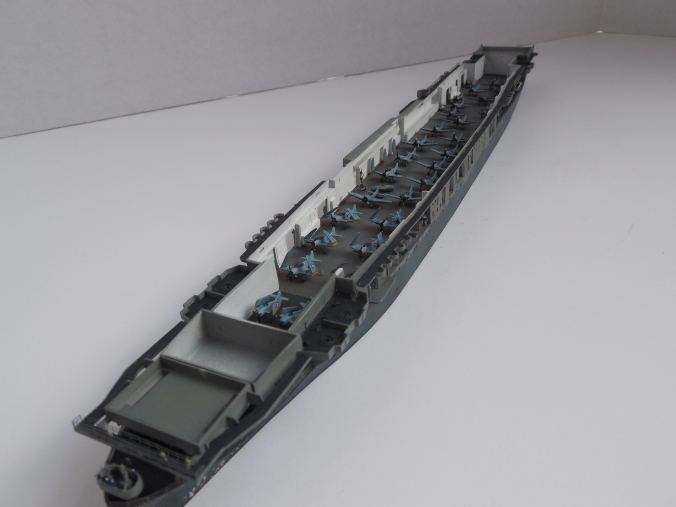 For her trip carrying the Doolittle Raiders across the Pacific, Hornet’s normal airwing was stored in the hanger deck below the flight deck.  To replicate this, I painted, detailed, and decaled about thirty aircraft which will not be visible on the flight deck.  In fact, very few actual details are visible on the finished build, however because I left the hanger doors open, the completed kit conveys the impression that a notable number of aircraft are stored below without revealing the details of any given one. 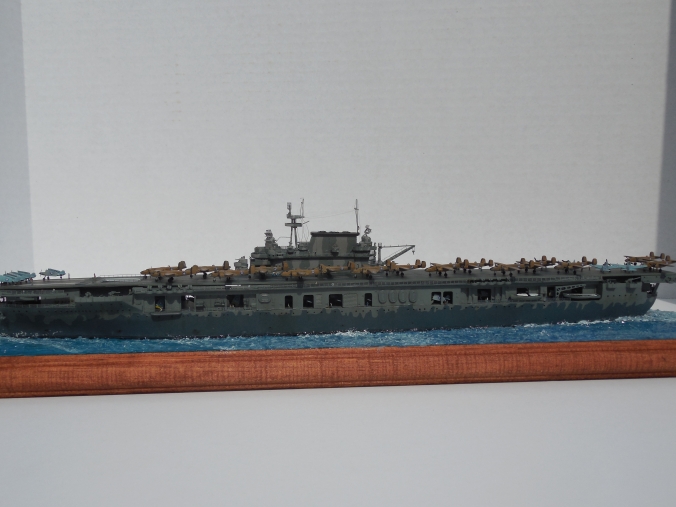 While I worked on these planes, the thought crossed my mind more than once; the grumbling grumble “why am I going to all this trouble for something that will be almost invisible?”

Small touches like this added a good ten hours to the overall build time, but the end result makes it more than worth the work.  The same thing can be said for interior fuselage detail that will be visible through one or a few small windows, for hydraulic brake lines on 1:72 aircraft, for black-painted exhaust uptakes placed inside a drilled funnel cap.  These small details won’t break a model if they aren’t there, but their presence is what elevates our work by showing an attention to detail that surpasses the norm.  The modeler doesn’t have to put them in if they don’t want – he or she should follow their happiness at the build table.

As for me, however (and especially when it comes to ships), if it can be seen, it should be seen.  At the very least, I’ll give it a try.

And that’s why I sweat the small stuff.

Related Dispatches from The Union

Yet Another Plastic Modeler